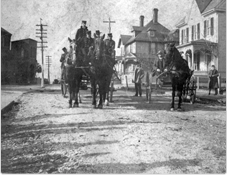 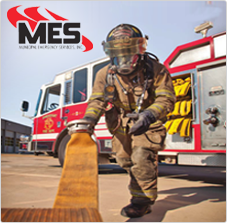 Listen to Live Dispatch from the areas we cover 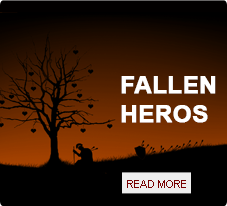 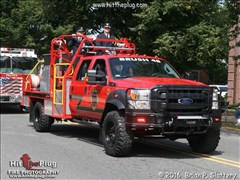 The annual parade held in Dover, Del. at the conclusion of the Delaware Volunteer Firefighters' Association conference. 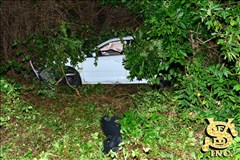 Just after midnight on 8-7-16 the Seaford fire Department was alerted for an accident with injuries on Ross Station Rd in the area of the railroad tracks. 87 Command arrived to find one vehicle that failed to make the curve in the road, left the road and struck a utility pole before going 30ft into a wooded section of woods. B-87 found the driver about a ¼ mile down the road walking. The incident was under control shortly there after. Delaware State Police was on scene and is investigating the cause of the accident. 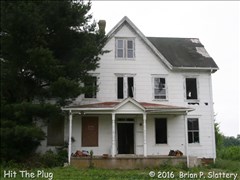 Hands-on training for shoring and stabilization, concrete breaching, and firefighter down rescue conducted by Murray Associates was held this past weekend at an aquired structure in Clayton, Delaware. 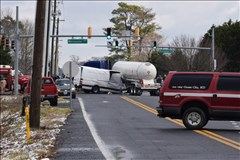 At 11:23am on Friday February 5th, 2016 The Bishopville Fire Dept was dispatched for a motor vehicle accident at the intersection of Route 113(Worcester Highway) and Bishopville Rd. Upon arrival fire and ems personnel found a van trapped underneath a tractor trailer with a large liquid petroleum tank on the back of it leaking. Both occupants of the van were pronounced dead on arrival. Showell Volunteer Fire Dept responded to assist along with Selbyville Fire Dept. Both north and south bound lanes are closed until further notice. The Worcester County Hazmat Team is on scene and the Maryland Dept of Environment is enroute to the scene to assist with the tank. The patients have not been removed from the van at this time and this will be a prolonged operation. The Medical examiner has been requested and The Maryland State Police is handling the accident reconstruction and investigation. No further information is available at this time. Photo credit and All inquiries in regards to the photos taken can be made to Christopher Casale (Freelance Photographer) 443-614-8300 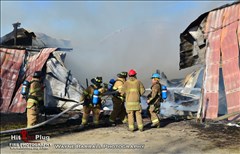 On 4-12-2015 the Federalsburg Fire Department along with Denton and Bridgeville Fire Companies were alerted for a barn fire at 5797 Noble Rd east of Federalsburg Maryland. While crews were en route they were advised that the barn was used to house horses. The property owner tried to help several horses escape that blaze. When fire crews arrived they found a 100x200ft barn fully involved with several horses still trapped inside. Due to the size of building and amount of fire command requested a 2nd alarm be alerted bringing fire crews from Seaford, Preston and Greenwood to the scene. Due to a partial building collapse crews had to perform an exterior attack. Crews worked for nearly an hour to bring the fire under control with several more hours for overhaul. Unfortunately several horses perished in the fire. One person was treated on scene for smoke inhalation. The Caroline Co Fire Marshals Office is investigating the cause of the fire. 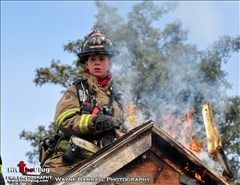 On March the 19th the Laurel Fire/EMS was busy answering calls starting with a brush fire. While units were clearing that and a medical assist we were again alerted for a 3rd alarm in our district. Dispatched advised of a structure fire in town on west 7th street. This box assignment brought 74 (Delmar) and 14 (Sharptown) to the scene. E 81-4 with Deputy Chief Sheridan cleared the medical assist and responded and arrived first to find a detached garage with heavy smoke showing. E-4 laid in at the hydrant and made their attack. E/T 81-5 arrives and picks up the hydrant and crew assists with fire suppression. Tower 81 and E/T 74-2 arrive and manpower performs ventilation. E-1404 and Rescue 74 arrive and crew assists with additional ventilation and overhaul. Firefighters made quick work of the fire and incident was placed under control in approx. 15 minutes with units working. The cause of the fire is still under investigation at this time. Despite the efforts of firefighters the garage sustained heavy fire and smoke damage. Laurel units would respond to 2 additional fires before the day was over. Deputy Chief Sheridan had command of the incident. Units responding; E 81-4, E/T 81-5, E 81-2, Tower 81, A-81, E/T 74-2, Rescue 74, E 1404, E 71-9 (Blades) for stand-by in Laurel.

Read more
Photo Of the day 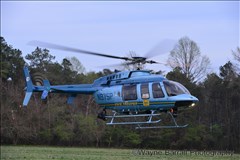 Please support us by donating online!